Here are the 1967 Detroit Lions. What can I say about them? After all, they're the Lions! 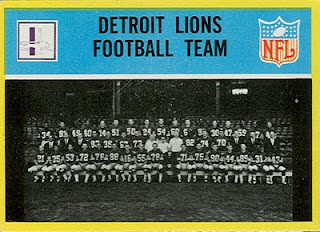 #61 Lions Team - This picture looks like it was taken at night, and from a distance. Maybe nobody wanted to be identified? The back of this card states that in 1966 the Lions were tied for last (old news!) in the Western Division at 4-9-1, and that "There's only one place for Detroit to go in '67 ...up". (Insert your own observations here.) 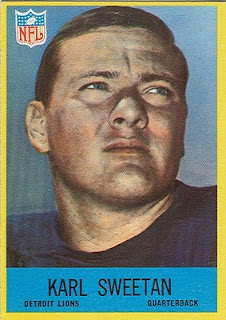 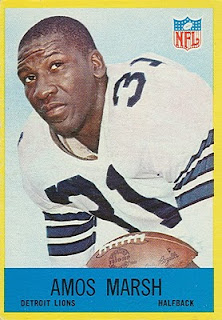 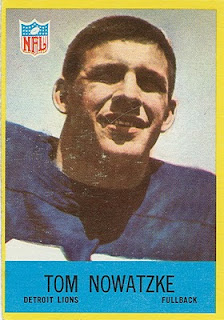 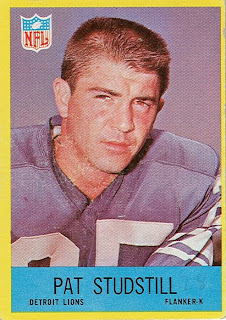 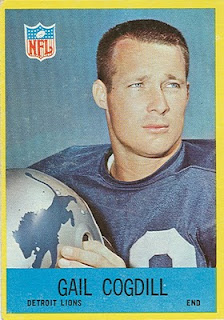 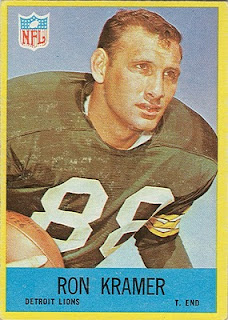 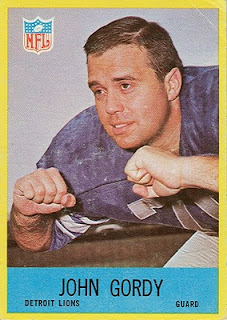 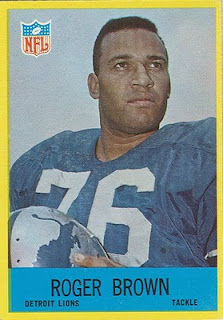 #62 Roger Brown - Roger was the Lions' 4th-round pick in 1960. He was the starting right defensive tackle from 1960-66, before spending 1967-69 with the Rams, as the replacement for the retired Rosey Grier in LA's "Fearsome Foursome". Brown scored 3 safeties during his time in Detroit. 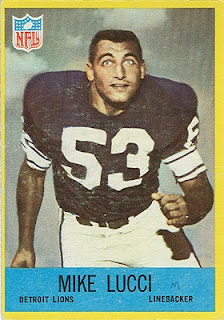 #67 Mike Lucci - Lucci was drafted by the Browns in 1961 but did not play that season. After 3 seasons (1962-64) in Cleveland, he came to the Lions. Playing on the left side for 2 seasons, Mike switched to middle linebacker in 1967 and started there until his retirement after the 1973 season. 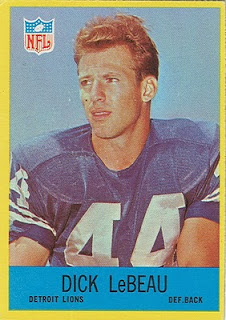 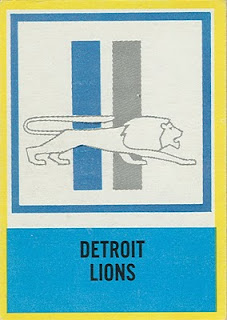 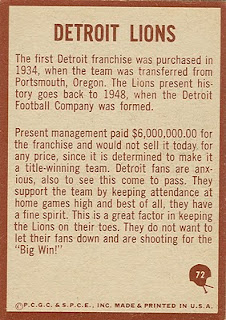 Posted by Jim from Downingtown at 8:41 PM 2 comments: Links to this post

Instead of the planned Detroit Lions, I'm going to skip ahead to the New Orleans Saints, since they are in today's Super Bowl. (After all, how many times will you see a pig fly?)

Here are the very first football cards for the New Orleans Saints. Instead of the team photo as with other teams, there is an extra card with the Saints' logo. As with all teams in 1967, there are 10 player cards. For the Saints, there are three defensive backs, FOUR offensive linemen, but no receivers or linebackers.

In 1967, I had all these except John Morrow and Elbert Kimbrough. 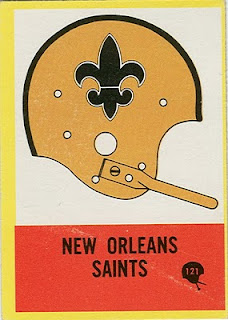 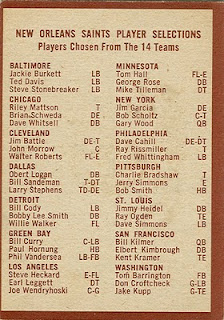 #121 New Orleans Saints - Here we have the logo of the expansion New Orleans Saints. The back of this card lists the players drafted from the 14 established teams. (The Falcons were exempt from the draft, since they were an expansion team in 1966.) Because of the mixed up numbering and the note on the front of the card below, it seems that the team roster was intended to be on the back of the card below. 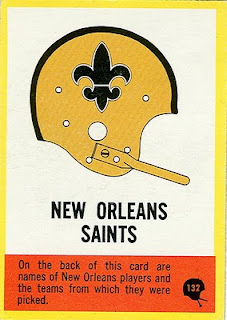 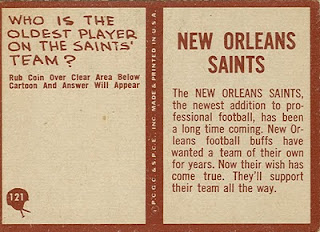 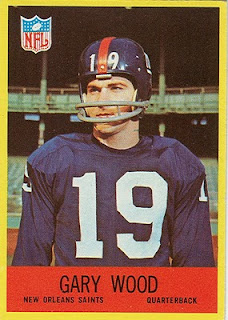 #131 Gary Wood - After 3 seasons as the Giant's backup QB, Wood was drafted by the Saints. The 1967 Saints had 3 QBs: Wood, Bill Kilmer, and Gary Cuozzo. Cuozzo started 10 games, while Kilmer started 4. I assume Wood was selected for the football card because he was a starter for part of 1966 with the Giants, after Earl Morrall was sidelined with injuries. After 1 season with the Saints, Wood returned to the Giants for 2 more seasons, backing up Fran Tarkenton. 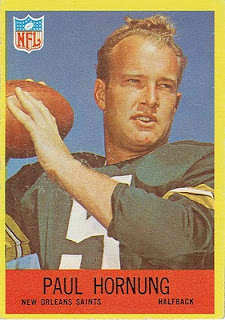 #123 Paul Hornung - Here's Paul Hornung, pretending to be a quarterback. After a long career with the Packers (well, except for 1963), Hornung was selected by the Saints in the expansion draft. Lingering injures from the 1966 season kept him out of the lineup for all of 1967, after which he retired. He was inducted into the Hall of Fame in 1986. 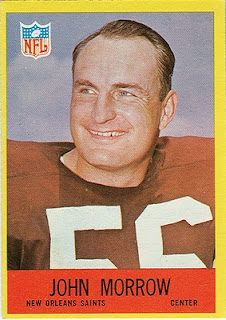 #128 John Morrow - John was drafted from the Cleveland Browns. He was the Browns' starting center for 7 seasons, and before that a 3-year starter for the Rams. Morrow retired before the 1967 season. 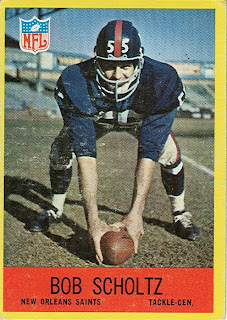 #129 Bob Scholtz - Bob was the Lions' 3rd-round pick in 1960, and played 5 seasons with Detroit and 2 with the Giants before coming to the Saints in the expansion draft. In what is becoming a familiar theme, Scholtz did not play in the NFL after 1966. 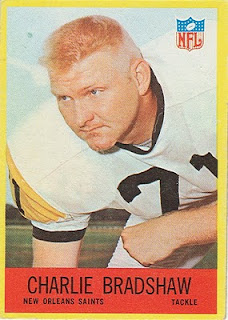 #122 Charlie Bradshaw - Bradshaw was drafted from the Pittsburgh Steelers (and looks very much like another Bradshaw who played for the Steelers - I wonder if they're related?). He was the Steelers' left offensive tackle for 6 seasons. He also played for the Rams from 1958 to 1960. Did he play in 1967? Yes, but for the Detroit Lions. The back of this card states that he was traded in March 1967. He retired after 2 seasons in Detroit. 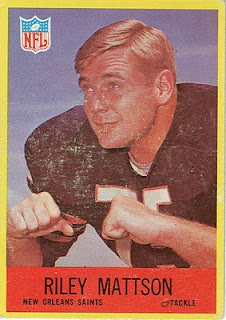 #127 Riley Mattson - Mattson was drafted off the Bears' roster. After playing 1961-64 with the Redskins, and missing the 1965 season, he played 1 season with the Bears. The narrative on the back of his card includes ".... where a knee injury slowed him down." Then, the scratch-off quiz says "What has slowed Riley down?"
Guess what? Mattson did not play after the 1966 season. WHO WAS IN CHARGE OF MAKING THE SAINTS' EXPANSION DRAFT PICKS? 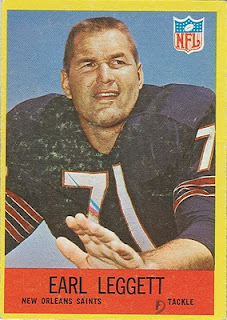 #125 Earl Leggett - Leggett played defensive tackle for the Bears from 1957-65, and for the Rams in 1966. He was taken in the expansion draft and actually played two seasons with the Saints before retiring! 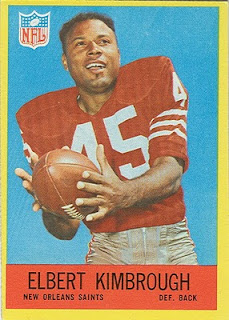 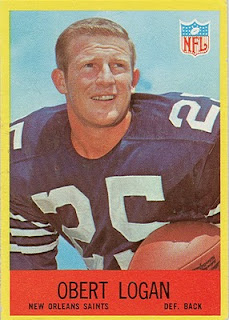 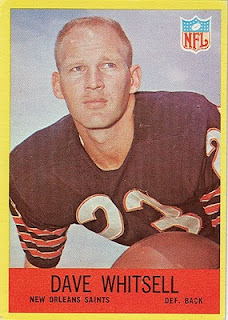 
Let's re-cap this mess: From these 10 players, the Saints got 3 seasons from Whitsell, 2 seasons from Leggett, and 1 each from Kimbrough, Logan, and Wood (albeit as the 3rd-string QB). Were these the 10 best players on the roster? (Isn't that the usual criteria for appearing on football cards?)


Coming Feb 23rd: Detroit Lions
.
Posted by Jim from Downingtown at 10:26 AM 1 comment: Links to this post