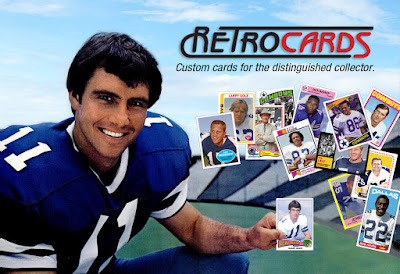 A few months ago, I stumbled across a website of the company above that makes (mostly football) Cards That Never Were. It seems that they specialize in Cowboys, Packers, and Bears sets, but there are many more football team sets from the 1950s to 1970s, as well as a few baseball offerings (such as 1970-style Brewers cards that actually say "BREWERS" instead of "PILOTS").

Here is the site's main link.

After much consideration as to whether I should post the cards I purchased (because although I bought them outright, this guy is in business to make these cards, and anyone saving my posted card images from the internet is siphoning off his business), I decided not to post them because of this and this.

However, I am posting the links to the sets I have already purchased, where you can find small thumbnails of each card (which have "right-click / save" disabled).

These cards look great, and the backs also match the vintage sets (except for a company advertisement). The only issue I've had so far is that the blue borders on the 1971 set do not match the color of the original set.

Also, they have created a 140-card extension set (the "3rd series") for the 1966 NFL set, which you can either purchase in its entirety, or build your own custom packs (complete with wax-pack wrappers). I have purchased 2 custom packs, 1 of all Eagles, and 1 of all quarterbacks.
Posted by Jim from Downingtown at 10:22 PM No comments: