This Colts team is one year away from appearing in Super Bowl III vs. the New York Jets. 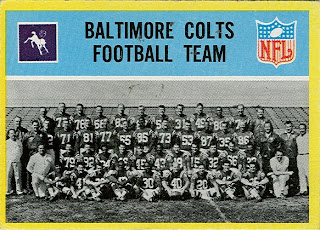 #13 Colts Team - The back of this card tells us that the Colts were on their way to the Western Conference championship in 1966, but "blew their chances", but that they did win the runner-up bowl. They also led the league in punting (which may be a dubious honor). 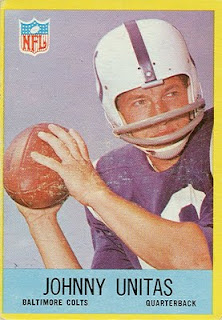 7 Giants
2 Saints (who are photographed in their 1966 Giants' uniform)
3 Colts
Weird obsession with the Giants! (Although I must admit, I like the look of the Giants' helmets.) 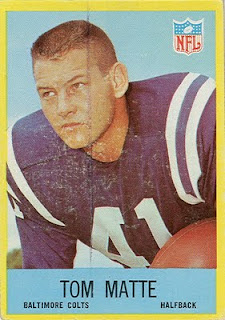 #21 Tom Matte - Matte is entering his 7th year. In 1965, he was the Colts' emergency quarterback, as both Johnny Unitas and backup Gary Cuozzo were out with injuries. 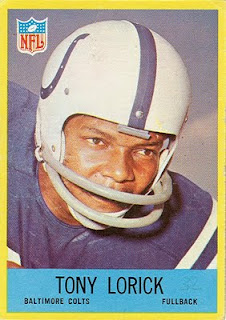 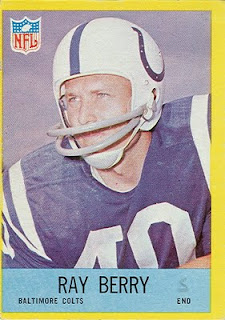 #14 Ray Berry - Here is the card for Colts' split end Ray Berry. The only problem is that it's been hijacked by Colts' cornerback #40 Bob Boyd. Ray Berry led the Colts in receiving in 1966, and had 7 TDs. This card tells us that Berry holds just about every Colts' receiving record. 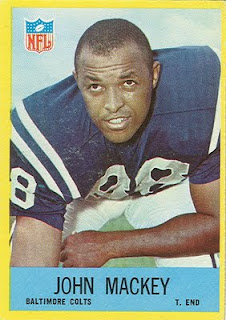 
(No offensive linemen or linebackers, due to 3 defensive backs being featured) 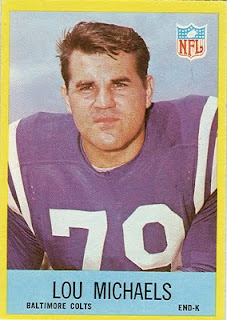 #22 Lou Michaels - This 10-year pro was the Colts' kicker and starting defensive end. He was the 4th highest scorer in the NFL in 1966. (He would soon be replaced at DE by rookie Bubba Smith.) 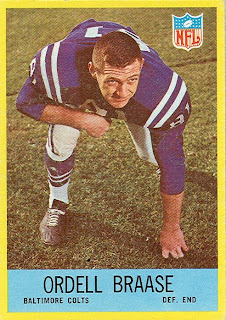 #16 Ordell Braase - Braase (pronounced BRAY-see) was the Colts' other starting defensive end. In 1966, he made the Pro Bowl for the first time in his 10-year career. 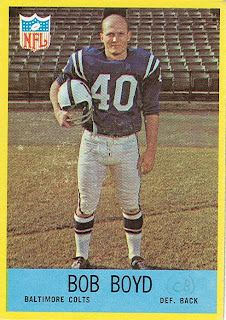 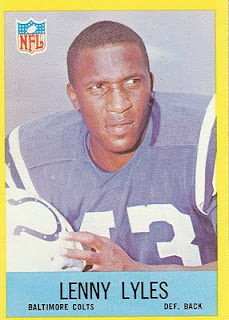 #19 Lenny Lyles - Lyles made his first Pro Bowl appearance in 1966, his 9th season. He began as a kick returner, and eventually moved up to starting cornerback. 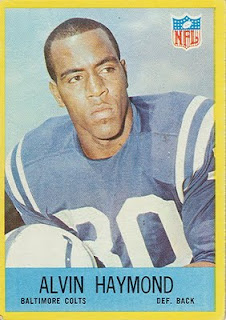 #17 Alvin Haymond - Haymond's main responsibility was returning punts, but the back of this card tells us that he won a full time job (must have been at safety) in 1966. No matter, in 1968 he was traded to the Eagles for running back Timmy Brown. 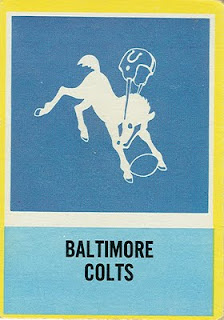 #24 Colts Logo - And here we have the Colts logo card, chock full of history: 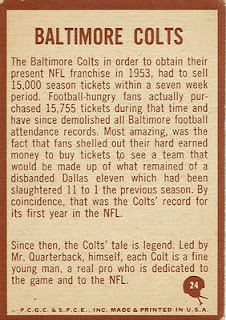 Doesn't that last paragraph just make you proud to be an American and/or a football fan? ;/


So there are the 1967 Colts. I got all these cards in 1967 except for Michaels and Lyles, so those 2 cards are in much better condition.


Next time: Chicago Bears
Posted by Jim from Downingtown at 9:24 PM