Here are the Falcons players with cards for 1967. This is only the Falcons' 2nd year in the league, so some player photos still show them in their previous team's uniform. 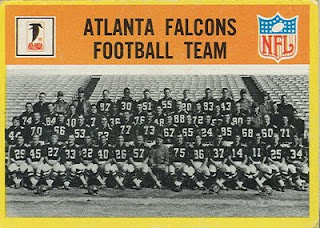 #1 Falcons Team - Some teams pose their players in numerical order. The Falcons chose not to. 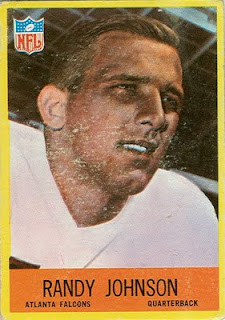 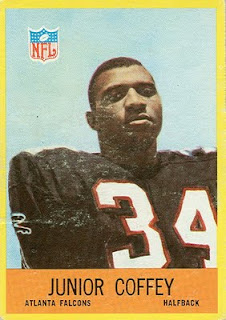 #2 Junior Coffey - Coffey led the team in rushing in its inaugural 1966 season. 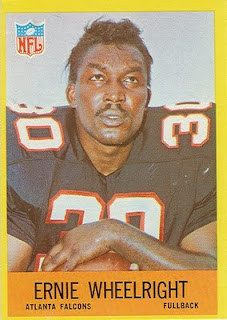 #11 Ernie Wheelwright - Ernie was obtained from the New York Giants. After his playing career, he appeared in various TV shows and movies, including "The Longest Yard". This is one of the few 1967 cards I didn't get back in 1967, so it doesn't have the scuffing that is seen on many of these other cards. 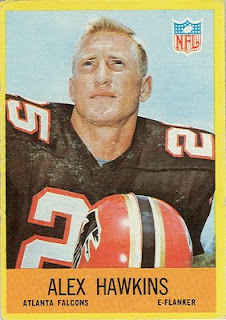 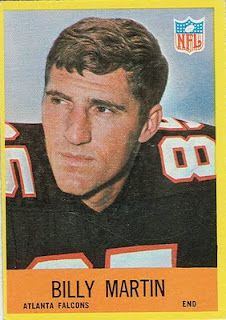 #6 Billy Martin - Martin's position is listed as "End". One thing that annoyed me about these cards back then was that the player's position wasn't always clear. Tight ends, split ends, and sometimes even defensive ends were all listed as "End", offensive AND defensive tackles were listed as "Tackle", and cornerbacks and safeties were both listed as "Defensive back". In Billy Martin's case, it is revealed on the back that he's a tight end. 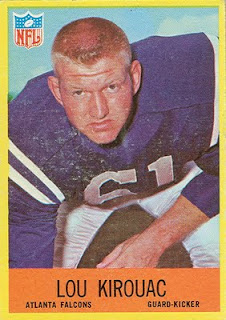 #5 Lou Kirouac - Ahh, the good old days... when kickers also played another position, and weren't just some lightweight ex-soccer player. Some were even hulking linemen, like Lou Kirouac! As you can see, Lou formerly played for the Colts. 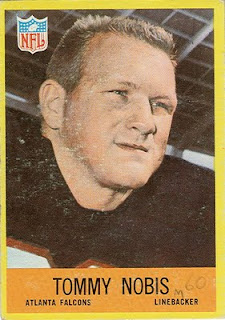 #7 Tommy Nobis - Remember my "positions" rant in the Billy Martin section above? For some reason, back in the day I took it upon myself to document that Nobis was indeed a middle linebacker. For good measure, I also wrote his #60 on the card. ... Kids!
I didn't like Nobis in the early 1970s. I think it was because he was always considered a better middle linebacker than the Eagles' Bill Bergey (which was probably true). I mean, nobody could dispute Dick Butkus, Ray Nitschke, or Willie Lanier, but ... Tommy Nobis? 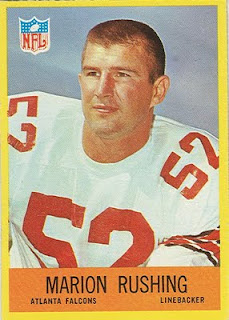 #9 Marion Rushing - Here's a non-descript outside linebacker. Look how clean his uniform is! (It almost looks like a Cardinals' uniform.) 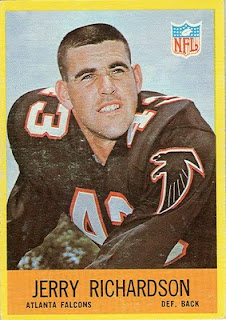 #8 Jerry Richardson - Jerry led the Falcons in interceptions in 1966. Was he a cornerback? A free safety? Who knows? 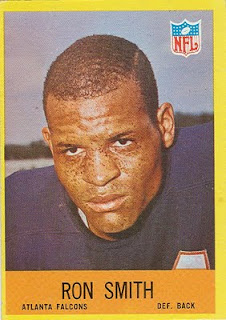 #10 Ron Smith - Smith led the league in kickoff returns in 1966, and also led the Falcons in punt returns. I suppose that's "code" for "I'm not a starting defensive back". Smith (along with Ernie Wheelwright) is 1 of the 2 Falcons cards that I got many years after 1967. 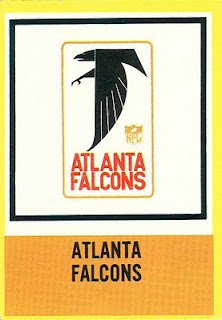 #12 Falcons Logo - Each team's cards wrap up with a logo card. The back of these cards include interesting tidbits about the team, such as: 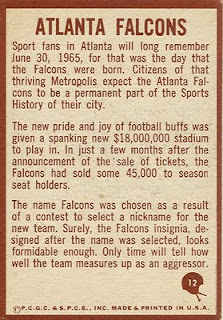 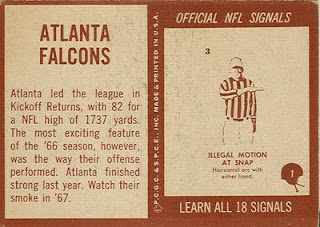 I've included the back of the team card as a 1-time sample. The left side always has a short summary of the previous season, and the right side has a referee signal. 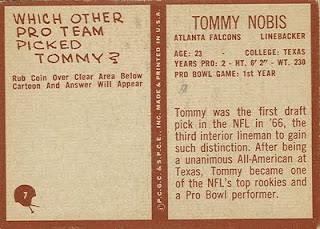 Here is the back of a typical player card. In 1967, no player stats appeared on the card backs. All player cards have a rub-off quiz on the left side, with the right side containing biographical information, followed by a summary of the player's previous exploits.
Every card has a blank area below the biographical information. This is where some cards note which players made All-League or the Pro Bowl. A few (like Fran Tarkenton) have a "traded" note here.


Next time: Baltimore Colts
.
Posted by Jim from Downingtown at 8:09 PM

I am enjoying your posts of 1967 FB cards. Football cards have always been the weak step sister to baseball cards.

I love the AFL so I am working on the 67 Topps FB set and have about 35 cards to go. Plus, I was born in 1967 so that is another reason for completing the set which I do enjoy as well.

Thanks Erik! I was beginning to think that nobody could find my football blogs.

I'll be posting the Chicago Bears' cards before Christmas.

After I post the all cards of the 16 NFL teams, I have some 1967 AFL cards that I'll post. In that set, I have most of the Dolphins and Chargers, and the other teams' quarterbacks, plus a few other cards.

You are welcome Jim. I check out this blog and your blog on 1968 Topps Football as well.

I am not a huge Philadelphia Gum Football fan. I loved the AFL so the Topps cards of this era was it for me.

The '68 Raiders cards will be posted on Thursday evening (1/7). I'm a little behind on the football blogs due to the holidays.