Here are the 1967 Los Angeles Rams. The yellow borders of all the cards combine with the yellow nameplate on the Rams' cards to make for an explosion of yellow (which has always been my favorite color anyway!) I collected all these cards in 1967, except for Roman Gabriel, which I acquired a few years ago. 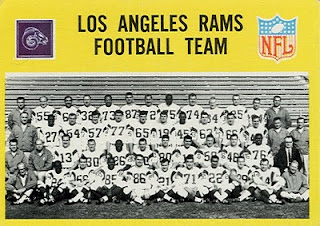 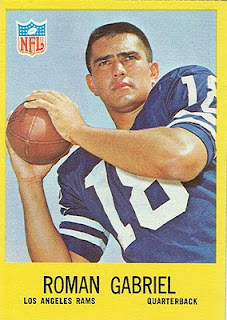 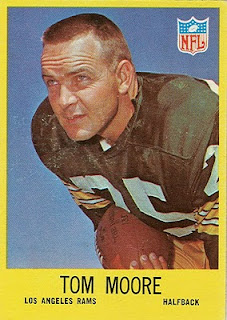 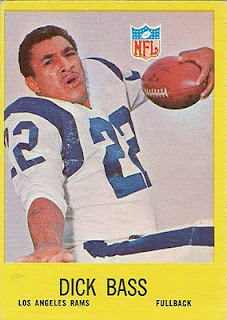 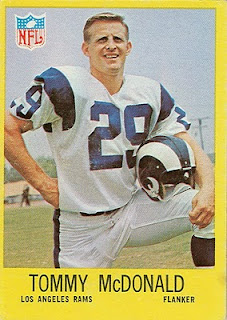 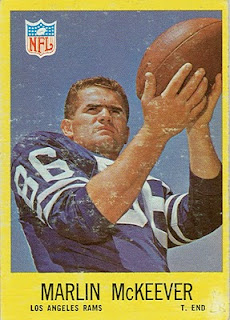 #92 Marlin McKeever - Marlin was the Rams' #1 pick (4th overall) in 1961. After playing outside linebacker for his first 3 seasons, McKeever switched to tight end during the 1963 season. After 6 seasons with the Rams, he spent the 1967 season with the Vikings. In 1966, he lost a finger in a car accident with teammate Roman Gabriel. Maybe this led to his switch to middle linebacker, the position he played for the Redskins (1968-70), the Rams (1971-72), and the Eagles (1973). According to Wikipedia, he and his twin brother appeared in The Three Stooges Meet Hercules in 1962. 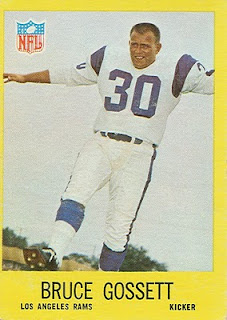 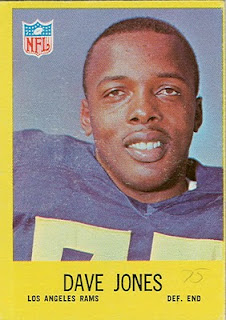 #90 Dave "Deacon" Jones - This 8-time Pro Bowler was a FOURTEENTH round pick for the Rams in 1961. He was a fixture at left defensive end for the Rams for 11 years, as a member of "The Fearsome Foursome". He was also the Chargers' starting left defensive end in 1972-73, before wrapping up his career in 1974 with the Redskins. Deacon was inducted into the Hall of Fame in 1980. 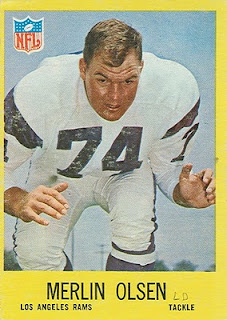 #94 Merlin Olsen - Olsen was the Rams' #1 pick (3rd overall) in the 1962 NFL draft. (He was also the Broncos' #1 pick the same year.) He played his entire 15-year career as a starting defensive tackle for the Rams. He made the Pro Bowl in every season but his last, and was inducted into the Hall of Fame in 1982. After his playing career, he was an announcer, and starred in 2 TV series (Little House on the Prarie and Father Murphy). He died one month ago. 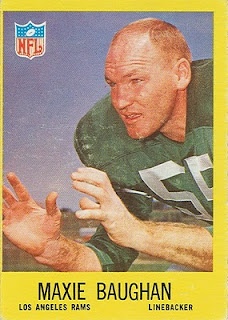 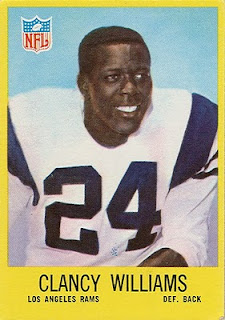 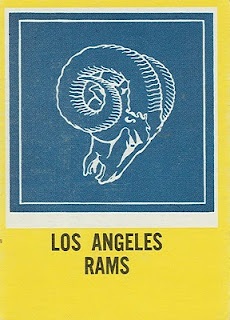 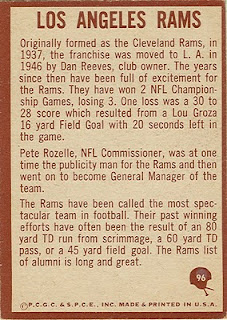 check out the facemask, or lack thereof, on the McDonald card.cod

Heh, those guys were hardcore throwbacks - they didn't need no stinkin' facemasks!

As I stated in another comment, check out Gabriel's stats as compared to Namath's.

Namath is in the HOF for two reasons: Super Bowl III and the fact he played in New York.

Last week I was watching a DVD of Super Bowl VII (Dolphins/Redskins). Not only did Redskins' QB Bill Kilmer have only a single-bar facemask, but he didn't have a chinstrap on his helmet. There were several plays where his helmet was hit, causing it to ride up on his head, while he was scrambling around trying to throw a pass.

What memories these cards bring.
I had them all.
I wish the Rams were still in Los Angeles.