A few years ago, I asked John Hogan at the "Cards That Never Were" blog if he would make a few custom football cards for me, specifically some starting quarterbacks that were missing from the '67, '68, and '71 sets. He soon responded with some real beauties. I have already featured those 1968 and 1971 custom cards on my blogs for those years. Now it is time for the 1967s. 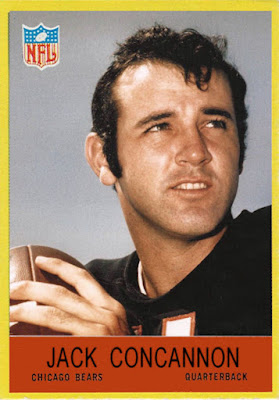 Jack Concannon was left out of the 1967 set because at press time, he was probably still the Eagles' #3 quarterback. Traded to the Bears in the off-season for TE Mike Ditka, Concannon became the Bears' starting QB for the next 4 seasons, before giving way to Bobby Douglass in 1971. 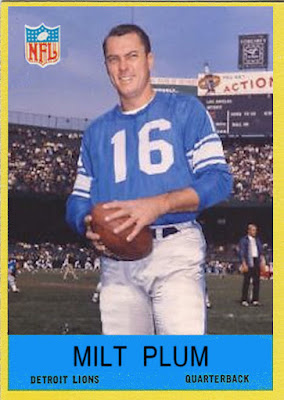 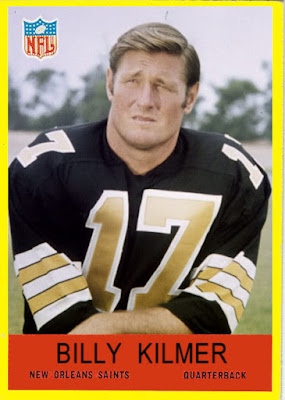 Billy Kilmer was the 49ers' 1st pick in the 1961 draft. After 6 years with the Niners (4 on the bench behind John Brodie, and 2 on injured reserve), Kilmer was selected by the Saints in the expansion draft prior to the 1967 season. Gary Wood was chosen as the QB for the '67 set. My theory is that Wood started many games for the Giants in 1966 due to Earl Morrall's injury, while Kilmer and 3rd QB Gary Cuozzo had not been starters in the previous season.

Kilmer spent 4 years in New Orleans, the last 3 1/2 as their starting QB. His penance with the Saints was rewarded in 1971, when he was traded to the Redskins and installed as their #1 QB for the next 7 seasons. In 1972 he led the NFL with 19 TD passes, and took the 'Skins to the Super Bowl. 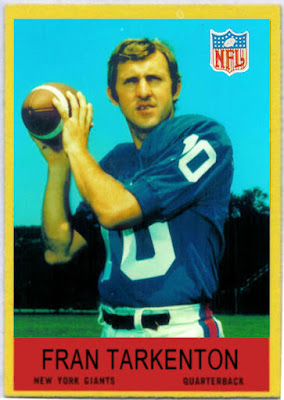 With the Giants' QB department in shambles after the 1966 season, the team acquired Fran Tarkenton from the Vikings. Tarkenton had been the Vikes' starter since their inaugural season in 1961, and made the Pro Bowl in '64 and '65. During his 5 seasons in New York he made 4 more Pro Bowls. After the 1971 season, Fran was traded back to the Vikings, where he was the starting QB for his remaining 7 seasons. He was inducted into the Hall of Fame in 1986. 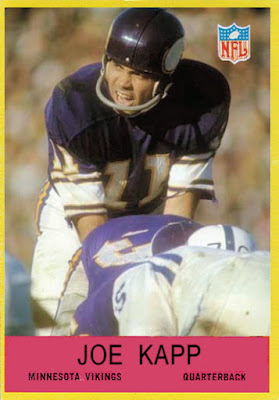 With Scramblin' Fran now in New York, what were the Vikings to do? Raid the Canadian League for their star QB Joe Kapp! Kapp played 4 seasons in the NFL, 3 with the Vikings and one with the Boston Patriots. Joe made the Pro Bowl in 1969, while leading the Vikings to the Super Bowl. 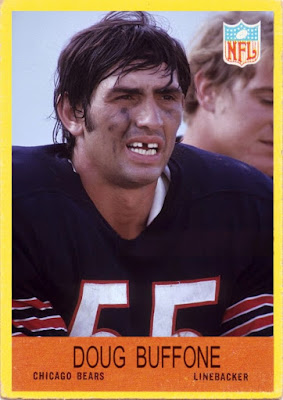 John also made some cards of Doug Buffone, after his death a few years ago. Here is the 1967 card. 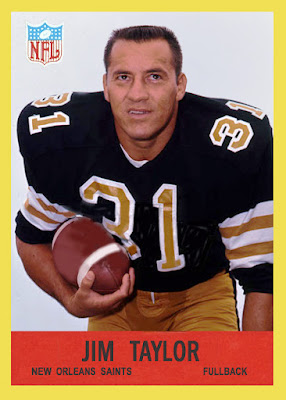 I also found this custom card of ex-Packers' great Jim Taylor floating around on the internet. It was made by Bob Lemke, who creates limited edition cards (fronts and backs) for sale to the public.

Posted by Jim from Downingtown at 2:57 PM