I had all these Giants cards in 1967 except for Spider Lockhart. 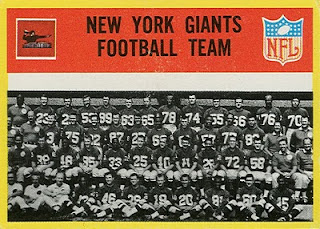 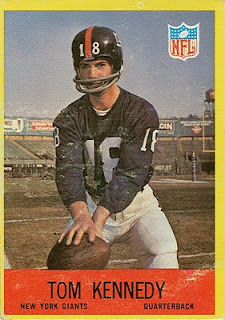 #114 Tom Kennedy - I always thought it was strange that Topps chose Tom Kennedy for their 1967 Giants' QB. Earl Morrall began the previous season as the starter, but after injuries sidelined him, he was replaced by backup Gary Wood, with Kennedy being called up from the Continental League as a backup. Wood was then lost to the Saints in the expansion draft, so the obvious choice for this card would have been Morrall. No matter, in March 1967 the Giants traded for Fran Tarkenton, making Morrall and Kennedy irrelevant. Kennedy's only NFL action was in 1966. 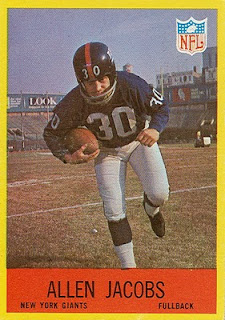 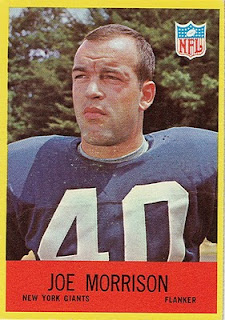 #116 Joe Morrison - Morrison was the Giants' 3rd-round pick in 1959, and played his entire career with the Giants (1959-72). Usually a running back or flanker, he also played defensive back during his career. 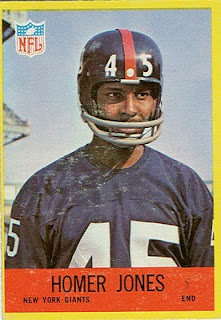 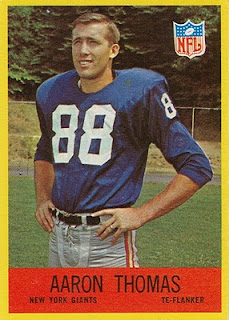 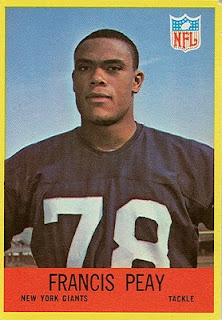 #117 Francis Peay - Peay was New York's #1 pick in the 1966 draft. After only 2 seasons with the Giants he moved on to the Packers, where he was their starting left offensive tackle for several years, before finishing his career with the Chiefs from 1973-74. 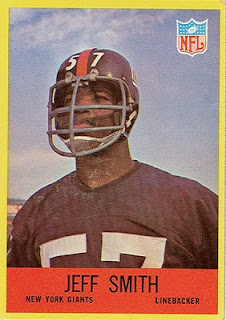 #118 Jeff Smith - Who's picking the subjects for these cards? Smith was a 10th-round pick in 1966, played 14 games for the Giants, and never played in the NFL again. 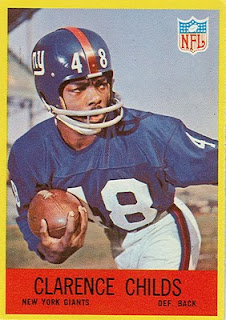 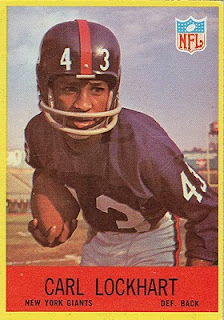 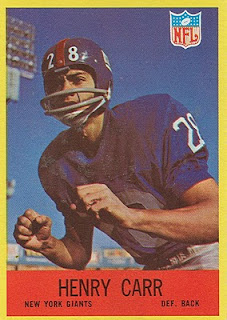 #110 Henry Carr - Carr was drafted by the Giants in 1965, and after 2 seasons as a starting safety, he concluded his NFL career in 1967 as the Giants' starting right cornerback. A track star at Arizona State, Henry won 2 gold medals at the 1964 Olympics in Tokyo. 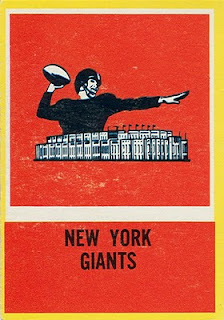 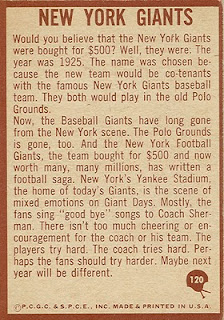 #120 Giants Logo - "The players try hard. The coach tries hard. Perhaps the fans should try harder." Whaaa? This is the funniest comment I've ever seen on the back of a sports trading card!

I have always wonder who the person at Topps (or Philadelphia) decided what players would be in the set. There have been some strange picks over the years.

In fact, The 1969 Topps Football set does not include Jack Kemp BUT, the four in one stamp insert does have Kemp.

Believe it or not Jim, there is no QB in the 1969 Topps set for the Bills which I find quite odd.

On a separate note, how long did it take you to complete the 1967 Philadelphia set?

I am eight cards shy of completing the 1967 Topps FB set which I have been collecting for about two years now.

I got most of the cards in 1967. All the rest but 2 were picked during 1980s' visits to cards shows and stores. I got the last 2 (Don Meredith & Bart Starr) earlier this year, AFTER already starting this blog.
I'm looking through my 67 & 68 binder now, and the other cards I didn't have in 1967 were:

I just re-read my 1968 Buffalo Bills post, where I said that Jack Kemp missed the entire 1968 season. That's probably why Topps left him off the 1969 set.

About a year ago, another blogger posted a custom-made 1969 Jack Kemp card: