Here are your 1967 Philadelphia Eagles. Two of these players were gone before the 1967 season. I got the Timmy Brown and Earl Gros cards a few years ago, but had all the rest in 1967. Most of them are heavily scuffed from playing with them back in the day. 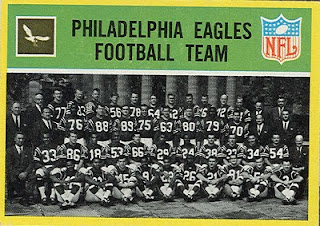 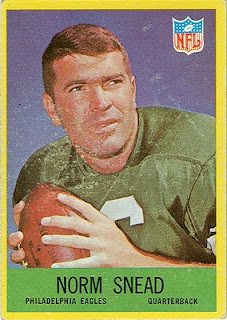 #142 Norm Snead - Snead was the Redskins' #1 pick (2nd overall) in 1961. After starting every game for the Skins for 3 seasons, Norm was traded to the Eagles for Sonny Jurgensen. He was the Eagles' starting QB for the next 7 seasons, before being run out of town following the 1970 season. Poor Norm - while Jurgensen led the NFL in passing yards 5 times and TDs twice, all Snead managed to do was lead the NFL in interceptions 5 times. After playing 1971 as the Vikings' backup, Snead was the Giants' starting QB in 1972, and played the next 4 seasons as a backup for the Giants and 49ers. 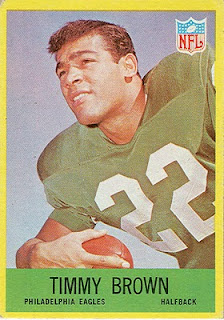 #136 Timmy Brown - Brown was drafted by the Packers in 1959, but only played in 1 game. Moving to Philadelphia for 1960, he spent 2 seasons as their return man, and was the starting halfback from 1962-66, while still returning punts and kicks. His playing time was severely decreased in 1967 (injury?). After the season he was traded to the Colts for DB Alvin Haymond. Brown retired after 1 season in Baltimore and became an actor. He appeared in both the M*A*S*H movie and TV show. 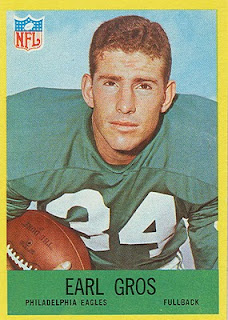 #137 Earl Gros - Earl was the Packers' #1 pick in the 1962 draft, but with Jim Taylor around, he was rarely used. Gros was the Eagles' starting fullback from 1964-66, then was traded in March 1967 to the Steelers for receiver Gary Ballman. After 3 seasons in Pittsburgh (the last 2 as starting fullback), he wrapped up his career in 1970 with the Saints. 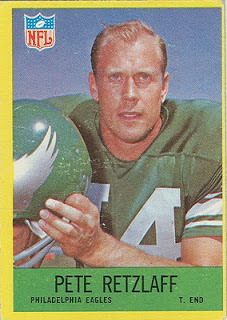 #140 Pete Retzlaff - Pete was one of the few bright spots on the Eagles' roster during this time period. Unfortunately, he retired after the 1966 season. Retzlaff was drafted by the Lions in 1953, but didn't make the team. After 2 years in the army, he joined the Eagles in 1956, and starred for 11 seasons, the first seven as a flanker and split end, before switching to tight end in 1963. Pete was a 5-time Pro Bowler. He became the Eagles' general manager in 1969 after the 1968 housecleaning that included the owner, GM/coach, and any chance to select O.J. Simpson as the #1 draft pick. (see comments under Leroy Keyes here) 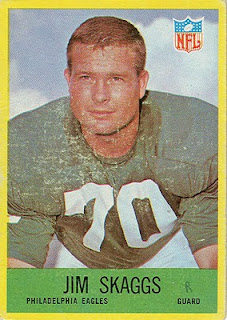 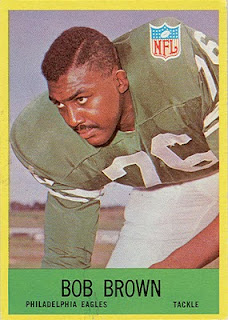 #135 Bob Brown - Bob Brown was probably the Eagle's best player during his time with the team. Bob was the Eagles' #1 pick (2nd overall) in the 1964 draft. In his 5 seasons with the Eagles, he started every game at right offensive tackle, except for missing 6 games in 1968 due to injury. Following the 1968 season, the Eagles hired their former tight end Pete Retzlaff as GM. Brown decided he wasn't going to play for the team with Retzlaff in charge, and demanded a trade. Bob was shipped to the Rams for WR Harold Jackson and others, starting every game in his 2 seasons with LA, while making the Pro Bowl in both years. His final 3 seasons (1971-73) were spent as the Oakland Raiders' starting right tackle. In all, he made 6 Pro Bowls and was inducted into the Hall of Fame in 2004. 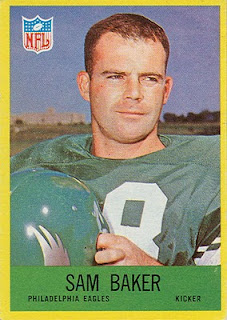 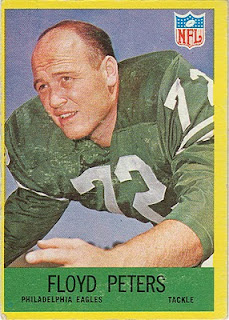 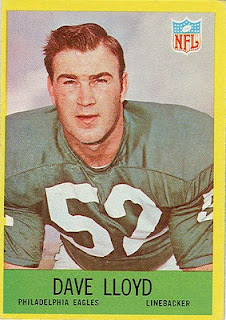 #138 Dave Lloyd - Lloyd's career path follows that of Floyd Peters. His first 3 seasons (1959-61) were as a member of the Cleveland Browns, followed by one season with the Lions, before joining the Eagles for the bulk of his career. Dave was the Eagles' starting middle linebacker from 1963 until midway into his final season of 1970. After he was replaced at MLB by former DE Tim Rossovich, Lloyd kept busy for the rest of the year by kicking off (leaving the field goals and PAT to rookie Mark Moseley). Dave made the Pro Bowl in 1969, his final season as a regular starter. 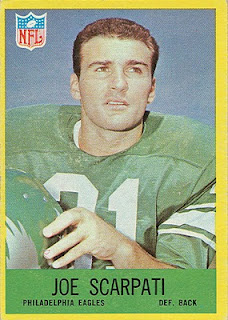 #141 Joe Scarpati - Joe was drafted by the Boston Patriots in 1964, but chose to sign as a free agent with the Eagles. After starting at strong safety during his rookie season, Scarpati was the Eagles' starting free safety from 1965-69. In 1968, he had 8 interceptions for a league-leading 182 yards. Traded to New Orleans after the 1969 season, he was the Saints' starting free safety in 1970, before returning to the Eagles for 1971. A training camp injury that year ended his career. 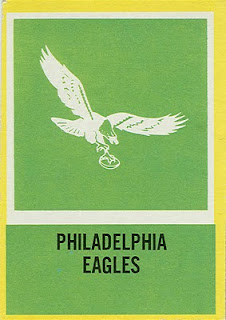 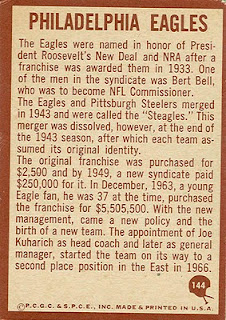 #144 Eagles Logo - Here's the classic Eagles' logo on Kelly Green - much better than the marketing-induced logo and colors concocted by the Jeff Lurie regime.


Next time: Pittsburgh Steelers
.
Posted by Jim from Downingtown at 7:41 PM

I remember Norm Snead very well.
He had a Pro-Bowl year with the Giants in 1972.

Thanks for your comments George. I hope to resume posting to my football blogs soon. (In fact, I've had my 1968 Cleveland Browns cards sitting out for over a month now, but baseball cards keep butting in the line to the scanner!)