It has been my custom to wait until year-end to note these, but this one won't wait... 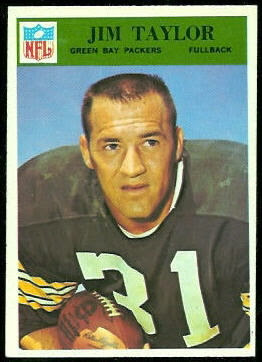 His final season with the Packers culminated in a Super Bowl I victory. During that season he had salary scuffles with Vince Lombardi, who spitefully traded him to the expansion Saints in the off-season (much like how Lombardi dismissed all-pro center Jim Ringo to the lowly Eagles 3 years earlier).

Taylor retired after the 1967 season and was inducted in to the Hall of Fame in 1976, the first of 12 Lombardi-era Packers in the Hall.

New York Times obituary
.
Posted by Jim from Downingtown at 1:11 AM