Who's the best team in the Super Bowl era?

Tomorrow is the Super Bowl. I'm not making any predictions on who's going to win, because that's already been done in 9.8 million places.

Instead, I am ranking all the teams in terms of success in the Super Bowl era. Below are the 32 teams, generally in order of Super Bowl winning percentage. (I have discounted the winning percentage for those teams making less than 4 appearances, for the same reason that batters who hit 1.000 after going 2 for 2 as a pinch-hitter are not eligible for the batting title.)

Tie-breakers for teams with the same winning percentage are determined by how many league championships they won in the pre-Super Bowl era. 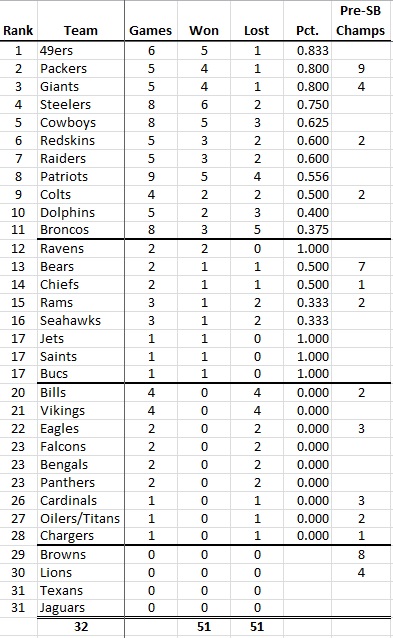 Teams in the first section are ranked strictly by their SB winning percentage.

The second section (less than 4 appearances, but with some wins) is generally by winning percentage, although the 1-for-1 teams were ranked lower because of only making 1 appearance.  I first thought about including the teams with 3 bowls in the first section, but I couldn't rank the Rams and Seahawks (with their 1 win each) ahead of the Ravens.

The 3rd section are the teams with only Super Bowl losses.  I first thought about ranking the 0-for-4 chumps last, but decided instead to give them credit for making the Supe so many times.

The last section are those teams that never made it to a Super Bowl.  Those poor Browns - they won 8 titles in the pre-Super Bowl era, including 5 straight from 1946 to 1950, but this is about Super Bowls, so they are near the bottom of the list.

My next post will be either the 1972 Patriots or the 1968 Eagles, depending on who wins tomorrow. (Hopefully I will post that sometime before Super Bowl LIII.)

Posted by Jim from Downingtown at 5:55 PM