Here are the 1967 Dallas Cowboys. Each of these players (except Dan Reeves and Lee Roy Jordan) just came off a Pro Bowl appearance in 1966. All of these players except Don Meredith would still be on the team when they got to Super Bowls V and VI. I had all of these cards back in 1967 except Meredith, Manders, and Howley. 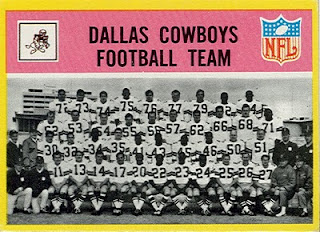 #49 Cowboys Team - Here's the first team we've seen that has posed their players in numerical order. Man, that Tom Landry was organized! (Hey, only 2 guys in the 80's?) 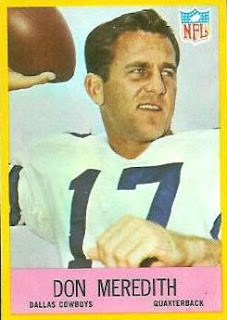 #57 Don Meredith - Meredith was the Cowboys QB for much of the 1960s, but retired just before they began their Super Bowl period. He then went on to announce Monday Night Football with Howard Cosell. 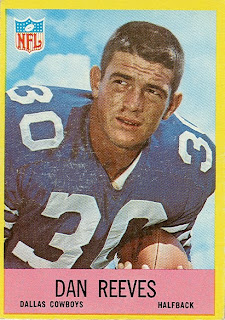 #58 Dan Reeves - Dan was the starting halfback in the mid-1960s, but the Cowboys upgraded with Calvin Hill and Duane Thomas to make their Super Bowl runs, leaving Reeves as a role player. After retiring, he was an assistant coach with the Cowboys, then a head coach with the Broncos and Falcons. 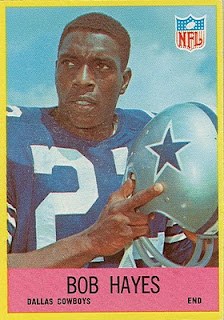 #52 Bob Hayes - The card back says Hayes was the only player to be selected All-Pro at 2 positions in 1966, but are split end and flanker really 2 different positions? Bob was a former Olympic gold-medal sprinter, and was finally inducted into the Hall of Fame in 2009. (Is he signaling the photographer?) 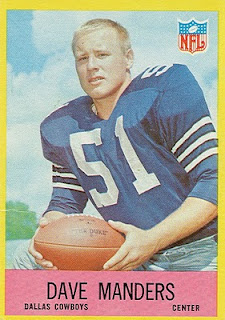 #56 Dave Manders - Dave took over as the starting center in 1965, and anchored the line through the early 1970s. Here we see him with a football, an unusual pose for an offensive lineman (who are usually posed with arms up, simulating a block), 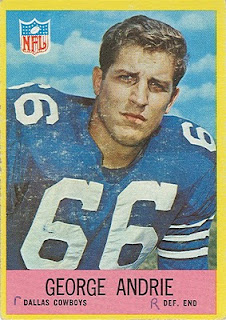 #50 George Andrie - George played his entire career (1962-72) with the Cowboys, and was their starting right defensive end in all but his last season. 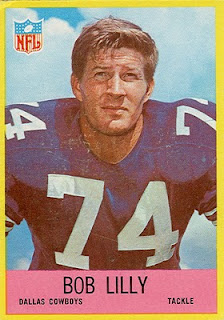 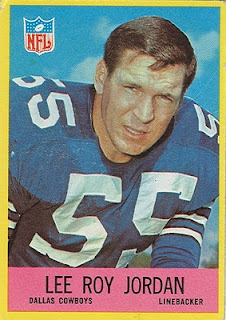 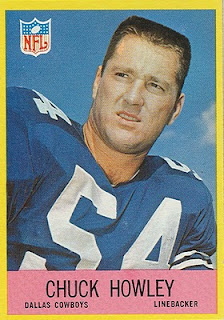 #53 Chuck Howley - The senior statesman of this bunch, Howley played 2 seasons with the Bears before coming to the Cowboys in the expansion draft. He played all but 4 games for the Cowboys between 1961 and 1972 (on the left side, until moving to the right side in 1969), but only played 1 game in his final season in 1973. Although the Cowboys lost Super Bowl V, Howley was named the MVP. He looks like a serious challenger to Johnny Unitas for best all-time crewcut. 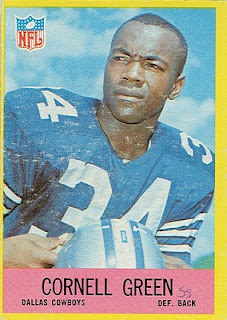 #51 Cornell Green - Green played his entire career (1962-74) with the Cowboys, and never missed a game. He was their left cornerback through the 1969 season, then moved to strong safety in 1970 with the arrival of Herb Adderley. 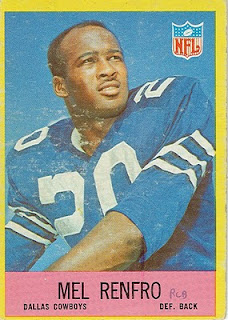 #59 Mel Renfro - Mel played his entire career (1964-77) with the Cowboys. He was the free safety for his first 6 years, then moved to right cornerback in 1970. He also returned kicks and punts for his first 3 seasons (leading the league in both during his rookie season). Renfro was inducted into the Hall of Fame in 1996. 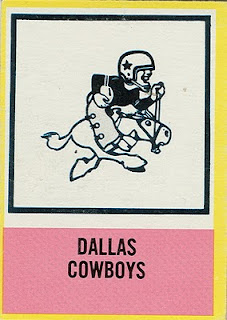 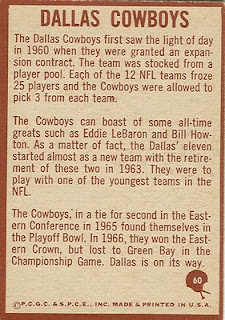 #60 Cowboys Logo - Eddie LeBaron was an "all-time great"? Who knew?


Next time: Detroit Lions
.
Posted by Jim from Downingtown at 4:57 PM

That is what I love about the old sets you can get defensive players and o-lineman in sets. They started to disappear in the 1990s for 2nd string QBs and 4th WIde receivers